What Is an Ostomy?

An ostomy is a surgically created opening in the abdomen that allows stool or urine to pass out of the body from the gastrointestinal tract or urinary tract. A portion of the intestine is brought out to the surface of the abdomen and sutured in place. The part of the intestine that is visible on the abdomen is called a stoma. A pouching system or âostomy bagâ is used on the outside of the body to collect the stool or urine. In some cases, it is possible to have a continent diversion type of ostomy, an alternative to a conventional ostomy, eliminating the need for an external pouch; however there will still be a visible stoma on the abdomen. 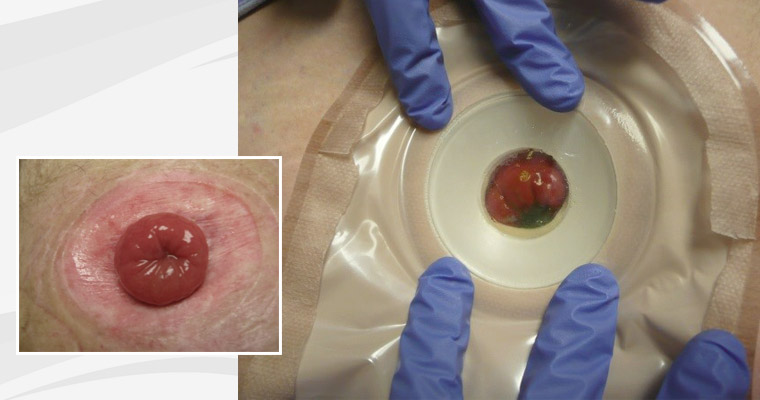 The part of the intestine that is brought out to the abdomen is called a stoma. When the surgeon brings this part of the intestine outside, it is turned back over itself, much like a turtleneck or a sleeve turned up before it is stitched in place on the abdomen. This means that you are seeing the intestine inside out. The blood supply to that portion of intestine is still intact, so it is still alive and functions in the same manner that it did previously. In other words, the small muscles in the intestine still push waste through so it appears to be moving.

In general, the stoma protrudes about Â¾ - 1 inch. Some stomas are flat or even with the skin level. It is good for you to get to know what your stoma normally looks like so you can report any changes to your nurse or physician.

There are many reasons for an ostomy.

The following are the most common:

An ostomy can be temporary or permanent and can occur at any age. The large intestine can be partially or fully removed and the bladder can be removed, while still allowing a person to live a full and productive life after this surgery. Ostomy surgery can be difficult to think about, but it does improve the lives of people with inflammatory bowel disease, incontinence or other conditions and it can save lives.